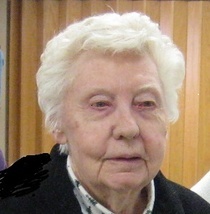 Romaine Faye (Littlefield) Kupfer was born January 3, 1924 in Hampden Highlands, ME. She was the only child of Carlton E and Mazie (McLaughlin) Littlefield. She was educated in public elementary school in Boston, MS, and graduated from Deering High School in Portland ME. She graduated from the U of Maine (Orono) in 1947 and the U of Missouri (Columbia) in 1949 with degrees in Geology. From 1944 to 1946, she was enlisted in the US Navy WAVES as an aerographer, stationed in Washington DC, Pensacola FL, and Oahu HA. She was on duty at CINCPAC, Pearl Harbor, on VJ Day, Aug 1945. She graduated from LSU (Baton Rouge) in 1967 with a MA degree in Geography and was employed as Assistant to the Director of Costal Studies Institute at LSU until 1977 when she retired.
On June 7, 1952 she married Donald H. Kupfer PhD. in Washington DC. They both worked for the US Geological Survey. They first moved to Claremont CA, where their two children, Madeleine and John, were born. In 1955, the family moved to Baton Rouge, LA, where Don was a professor at LSU. In 1983 Romaine and Don bought a summer home in Canon City, CO, and made it their permanent residence in 1995. Then in 2002 they moved to Powell WY, to be near their daughter, son-in-law, Larry J Van Epps, and grandchildren. Don died there in 2010.  Romaine was a member of Phi Mu National Sorority; AAUW, and U of Maine Foundation. In Baton Rouge she was a member of Red Stick WAVES and Skimmers. At Canon City she joined the History Society, Geology Club, Fremont Center for the Arts, and Garden Park Paleo Society. In Powell she joined SOS and the Rock Club.  She was active in uncovering the genealogy of both hers and her husbands family.  After Donâ€™s death Romaine was well-taken care of by Madeleine, the Heartland, Care Center and many friends including, good friend Lynne Whitmore in Powell.
Romaine was preceded in death by her parents Carlton and Mazie Littlefield (ME).    Survivors are children: John (Marie) Kupfer of Orange CA, Madeleine (Larry-deceased) Van Epps of Powell: grandchildren: Stephanie (Jacob) Johnson of Arden Hills MN, Heidi ( Adeeb) Khan of Denver CO, Chase ( Angela) Portland OR and great grandchildren: Maizy, Berkeley, Emery, and Ivy Johnson and Zia and Abram Khan.  Memorial services will be held Memorial weekend at Grace Point church in Powell.

To send flowers to the family in memory of Romaine Faye Kupfer, please visit our flower store.