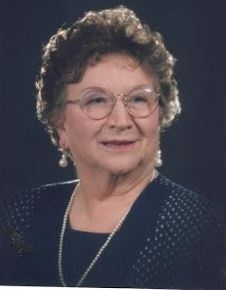 Jewel graduated from Central High School west of Marlow, Oklahoma. She then studied journalism and French at Cameron University at Lawton, Oklahoma, where she met the love of her life, husband Jean. B. Carter.

Jewel and Jean married on Dec. 26, 1941, and moved to Wichita, Kansas, where Jean worked for Boeing and Jewel was busy raising their three sons, Tolbert, Ronald, and Rodger. In February 1953, during a family trip to Heart Mountain, they purchased a homestead and moved there in March 1954. Jewel loved living in the Mountain View community. The neighbors were their extended family. In 1957, Jon March joined the family, followed by Julie in 1959.

Jewel was a partner on the farm, as well as being active in 4-H, Mt. View Community Club, Extension Club, Gingham Gals Sewing Club and the Mt. View Methodist Church Circle. Jewel helped organize the sheep lead contest at the Park County Fair in 1976 and was the sheep lead superintendent for 40 years. Jewel loved to have family gatherings. Her family was her top priority, and she always enjoyed their company, especially her grandchildren and great-grandchildren.

Jewel will be missed by all who knew and loved her.

She was preceded in death by the love of her life, Jean B. Carter; son Tolbert D. Carter; her parents, Gerntrude and M.C. Carson; mother-in-law and father-in-law, Ruby Carter and Eugene R. Carter; brother M.H. Carson and his wife Dixie Carson; and half brother Ollie Lee Stephan.

Any donations in Jewel’s name may be sent to your favorite charity of people in need.

To send flowers to the family in memory of Rubee Jewel Carter, please visit our flower store.