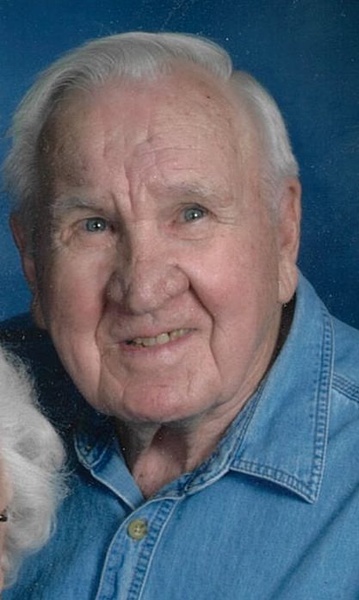 On January 29, 2020, Rudy Stradinger, 93, moved to heaven to live with the Lord eternally. He passed away peacefully at the Powell Valley Care Center, where he had been cared for by many loving staff for the past 10 months.

He is survived by his loving wife, Barbara, of 71 years, their children, and grandchildren. The couple lived in Spearfish, SD for 57 years where Rudy taught English, Speech, and Mass Communications at Black Hills State University for 26 years, retiring at the age of 62. Prior to living in Spearfish, Rudy taught in Portland, OR, Watertown, Eureka, and Martin, SD.

He was loved and respected by the many students whose lives he touched, and well-known for the quality theater productions that he directed in Watertown and Portland.

Rudy was born in Dewey County SD, and graduated from Dupree High School.  He then enlisted in the US Navy during WWII and was a member of the Armed Guard.

Following the war, he married hometown sweetheart, Barbara Lawrence, and moved to Yankton, SD, where Rudy completed his Liberal Arts degree. He received his M.A. Degree from the University of WY in Laramie, WY and then continued with his teaching career.

Riding horses, hunting, and fishing, were favorite outdoor activities he loved to share with others. Rudy and Barbara (affectionately known by their CB radio handle “RuBarb”) also enjoyed numerous and treasured camping excursions with many family and friends over the years.

Rudy was genuinely interested in others and, being the renowned conversationalist that he was, shared many deep and lasting friendships throughout his lifetime.

He was an active member of the Spearfish United Church of Christ, where he greatly enjoyed serving in leadership roles and sharing his musical gifts.

His love for the Lord was demonstrated in the way he lived his life. He considered entering the seminary and sometimes served churches by preaching when a pastor was unavailable.

In a memoir recovered by family when going through some of his writings, Rudy wrote: “When I was asked ‘how would you like to be remembered when your life has passed?’ I answered ‘I would like to be remembered for the simple fact that it made some difference that I lived at all…in many decisions we make in our daily lives as men and women, we need only to ask the question, What would Jesus do? That means caring, sharing, and going the way that takes courage.”

Rudy was preceded in death by his parents, David and Magdalena Stradinger, brother, Raymond Stradinger, and great-grandson, Tyler Risty-Liebl.

To send flowers to the family in memory of Rudy Stradinger, please visit our flower store.