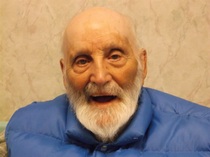 
Sammie Lee Alexander of Powell, 91, died peacefully Dec. 13, 2015, with Esther, his beloved wife and best friend of 70 years, at his bedside.
Sam was born May 27, 1924, in Enid, Oklahoma, one of 10 children born to Lelia Anthony (Parks) and Wiley Raymond Alexander. However, his siblings were separated during the hard times of the Great Depression. He fended for himself at the tender age of 10, staying in foster homes when he could and working very hard so he could buy clothes and books to stay in school.
In 1942, when he was 18 years old, Sam enlisted in the U.S. Marines and was assigned to the 4th division, 24th Regiment. He fought many battles, including Saipan, Tinian, Roi-Namur and Iwo Jima. Sam saw the flag fly over Iwo Jima. He won many medals, including the Purple Heart.
In 1945, he returned home to Oklahoma and married his high school sweetheart, Esther Larue Dettrich, in Ringwood, Oklahoma. For the next four years, Sam served as the youngest man in the Oklahoma House of Representatives, representing Major County, Oklahoma.
The couple moved to Wyoming in 1950, where Sam worked in various oilfields around the state. Eventually, they homesteaded 12 miles northeast of Powell on Polecat Creek. They farmed and raised Angus cattle.
Sam went back to school and earned his bachelorâ€™s degree in agriculture from Oklahoma State University. Over the years, he farmed, worked as a substitute teacher and served with law enforcement in Powell. He jokingly called himself the sheriff of Polecat Creek.
Sam was active in the Masonic Lodge and the Shriners, and he attended the Assembly of God Church in Powell. He loved to garden, camp and enjoyed rock hunting. His wife, Esther, worked 27 years as the head bookkeeper for the Powell school district.
He was preceded in death by his parents; brothers Wiley Monroe Alexander and Albert Alexander; and sister Mary Ann Maggart.
Sam is survived by his wife Esther Alexander of Powell; niece Peggy (Jim) Caffro and nephew Ronny Alexander, both of South Carolina; as well as niece Joyce Watts of Texas.
Memorial services will be Friday, Dec. 18, at 2 p.m. at the Glad Tidings Church in Powell.
Burial will be in the Crown Hill Cemetery.
Thompson Funeral Home is in charge of arrangements.
Condolences can be sent to the family online at www.thompsonfuneral.net or to P.O. Box 807, Powell WY, 82435.
To send flowers to the family in memory of Sammie Lee Alexander, please visit our flower store.