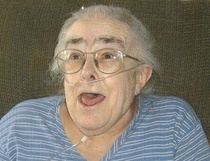 Obituary for Shirley Anne Fales
Shirley Anne Fales, age 74, passed on peacefully in her sleep early September 10, 2016. She will be greatly missed by many including friends, those at the Powell Valley Care Center who cared for her, and those with whom she worked at the Powell Memorial Hospital cafeteria for 30 years.
She was born on September 22, 1941 in Greybull, Wyoming to Rosella June Caldwell and Fred Carl Meyer. Her father passed away in February 1948. After this Rosella met Paul Otto Fales in a store at Emblem and they were married in November 1948. Then, Shirley and her sister Cora Mae were both adopted by Paul in July 1949, by which time they had moved to a farm near Garland.
She attended Powell schools and graduated from High School in 1959 along with many friends. She had a delightful sense of humor with her friends, work associates and family over the years.
Shirley was very loyal to many country music singers and belonged to their fan clubs.  In addition, she was a great fan of Elvis Presley and over her life accumulated an amazing collection of his records and memorabilia.  Her love for this music took her on more than one occasion to Branson, Missouri, as well as other cities, to attend concerts. She also went to Memphis, Tennessee where Elvis Presley was from and toured Graceland on several occasions. In the early 1980â€™s she went to Los Angeles and stayed with her cousin David Fales and his family and went to the beach as well as toured Universal Studios.
She was preceded in death by her father Carl Meyer, her mother Rosella Fales, her father who adopted her, Paul Fales, and also by her sister Cora Mae (Fales) Gossett. In addition, on the Fales side of her family, her uncles and aunts Heard and Alice, Frank and Lola and Bill Talbott. She was also preceded in death by grandparents and other family members from her Meyer, Caldwell and Fales families.
She is survived by her niece Jaylene Gossett, nephew Paul Fales Blakely, great nephew Carl Blakely (age 17), Sierra Leigh Blakely (age 12), Aunt Joan Talbott, Aunt Vivian Fales, cousins Ruth Fales Cook, Charles Fales (Mimi), Steven Fales (Kathy), David Fales (Kristine), Cathy Talbott Wilson, Diana Talbott Birkrem (Bryan) and Edward William Talbott (Shannon).
A special viewing will be at 10 AM on Wednesday, September 14th at Thompson Funeral Home in Powell with a graveside memorial service following at 11 AM at Crown Hill Cemetery near Powell.
To send flowers to the family in memory of Shirley Fales, please visit our flower store.