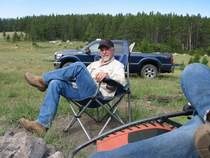 Steve McCament, 69, of Powell, died April 1, 2017, near Stanley, North Dakota.
He was born Oct. 21, 1947, in Mt. Vernon, Ohio.
Steve moved with his parents and family to Albuquerque, New Mexico, then finally settled in Aztec, New Mexico.
He was drafted into the U.S. Navy and served from 1966-70. Steven served in Vietnam and was honorably discharged in 1970.
He worked more than 40 years in oilfield industry. Steve started with a shovel in his hand, and ended with a pen in his hand.
He was preceded in death by his parents, Kenneth and Estella McCament, and brother Larry McCament.
Steve is survived by his wife Cindy McCament; brothers Stan (Sharon) McCament and Paul McCament; children Will McCament, Kimberly (Brian) Demos, Seth McCament; as well as many nieces, nephews, grandchildren and stepchildren.
Graveside services have been held.
Thompson Funeral Home assisted the family with arrangements.
To send flowers to the family in memory of Steve McCament, please visit our flower store.