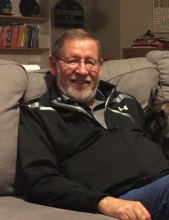 Tandy was born November 10, 1954, in Powell, Wyoming. He was the son of Gwynn Wilbur and Nadean (Conway) Marshall. As a young child, Tandy was raised and received his education in Powell where he later graduated. Following high school, Tandy remained in the Powell area until 1978. At that time Tandy moved to Hominy, Oklahoma following the oil boom. He immediately accepted employment with Ceja where he worked as a seismograph technician. Tandy continued working with Ceja and was later transferred to Iuka, Illinois in 2000. In 2009, Tandy returned to Oklahoma, making his home in Skiatook.

Tandy loved being outdoors. A couple of his favorite places to be was in Gunnison, Colorado or Yellowstone National Park fishing. He loved living in Wyoming and always enjoyed going back to visit. However, his preferred place to be was with his grandchildren that he loved dearly. Tandy had a passion for cars especially Corvettes. He also had a daily ritual which would consist of writing in his journal. For many years Tandy, would record the Dow opening and closing, the weather, the close of oil, gas, and gold as well as a brief comment on how the day went.

Funeral services will be held 11:00 AM Friday, November 3, 2017, at the Nazarene Church in Hominy, Oklahoma with Pastor Carl Brown and Jim Johnson officiating. Burial will follow at the Crown Hill Cemetery in Powell, Wyoming on Wednesday, November 8, 2017, at 2:00 pm.  Thompson Funeral Home will be in charge of the arrangements.

To send flowers to the family in memory of Tandy Marshall, please visit our flower store.
Send a Sympathy Card