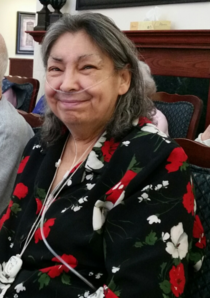 Valle Rose Burgener, 66, died suddenly Thursday evening, April 20, 2017, in Billings.
She was born to Frank P. and Dolly Berry Young on June 8, 1950, and she was the youngest of seven children. Valle grew up in Fairbanks, Alaska, graduating from Lathrop High School in 1968.
Valle met the love of her life Kenneth Burgener and they were married Nov. 10, 1970. Shortly after marriage, Ken and Valle moved to Anchorage, Alaska, in 1972, where she raised a family including one son and daughter. In addition to raising her family, Valle had a deep love of crafts including quilting, knitting and crocheting.
Upon Kenâ€™s retirement in 2005, they moved to Powell, where they lived until Kenâ€™s passing. Valle remained in Powell until serious medical necessities forced a move to Cody. Valle made friends with Lee and Marcia Faubion and through this special relationship, Valle was able to remain independent in spite of serious medical problems.
After a time of difficulty brought on by her medical condition, Valle moved to an assisted living center in Billings, this was one of her happiest times in years. Valle spoke of the specialness of her time at her new residence. Here, Valle was able to be more social with many of the residents and staff valuing her special stories.
Valle spun many true tales of her youth in Alaska that held the listeners spellbound. Her stories, her social time, her new close relationships and a decreased burden of self-care continued until her sudden passing.
Valle was preceded in death by her husband Ken, her parents Frank and Dolly Young, a brother Don (Buzzy) Young, and a sister Tana Haltuch.
Valle is survived by her son Lonnie; daughter Brandy; two brothers Patrick (Betty) Young and Raymond (Jeradell) Young; and a sister Joan (Warren) Mattielli.
Valleâ€™s services will be held Wednesday, April 26, at 10 a.m. with viewing at 9 a.m. at St. Barbaraâ€™s Catholic Church in Powell. Interment will follow at Crown Hill Cemetery in Powell.
To send flowers to the family in memory of Valle R Burgener, please visit our flower store.
Send a Sympathy Card