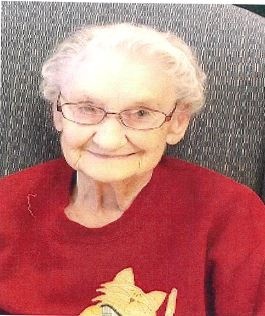 Virginia was born in Seymour, Missouri, to parents Rachel and Noah Armstrong. She was born the oldest of three with younger brothers Frank and Robert. When Virginia was four years old, the family moved to republic, Missouri. She graduated from Republic High School and then attended nursing school at St; John's Hospital in Springfield, Missouri. She married her husband, Harold, on January 1, 1947. They were blessed with their son, Rick, two years later. The young family moved to Kansas City where Harold worked for Missouri Pacific Railroad and Virginia worked for Montgomery Ward.

After Harold died, Virginia moved to Powell to be closer to Rick. Virginia enjoyed a life long love of knitting and shared the results of her labors with family and friends for many years. She was a member of First United Methodist Church in Powell and had been loving at the Care Center for the last four years. She so loved the caring staff and her roommates, especially Dixie Olson and Pat Jones.

She was preceded in death by her parents, her husband Harold, and brothers Frank and Robert.

She is survived by her son, Rick (Barbara) of Powell and granddaughters Chris (Brian) Hunter of Billings, Montana and Courtney Clark (Jeremy) of Miller, Missouri. She also leaves great-grandsons, Conner, Caleb, Landon, and Blaine and great-granddaughter, Jazmin. She is also survived by numerous family and friends.

A memorial service is planned for Saturday, October 26, 2019 at 1:30 pm in the Powell Valley Care Center Recreation Room.

In lieu of flowers, donations may be made to Powell Valley Care Center, 999 Ave. G, Powell, Wyoming 82435 or to the charity of one's choice.

Cremation has taken place and her remains will be interred next to her husband in Kansas City in the spring.

Condolences may be sent online to www.thompsonfuneral. Net or to P.O Box 807, Powell, Wyoming 82435.

Thompson Funeral Home is in charge of the arrangements.

To send flowers to the family in memory of Virginia Jane Clark, please visit our flower store.