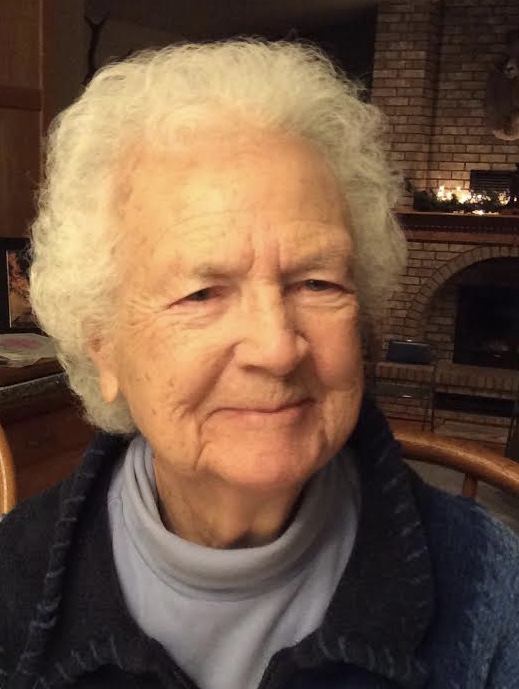 Virginia Mae Bruce was born in Sheridan, Wyoming on February 24, 1927 to George and Myrtle Barker Bruce. She left this world October 8, 2020 at the age of 93. Virginia was fiercely independent and spent several hours each day  dedicated to exercise and her health. She was an extremely disciplined person. It was just one missed step as she lost her balance and fell. Virginia passed peacefully at the Billings Clinic six days following brain surgery.

Virginia was the second born of four children. She had one sister, Georgia (Fay) Buck, and two brothers Donald (Treva) Bruce and John (Donna) Bruce. She had numerous nephews and nieces she was proud of. Virginia had one friend she dearly respected and loved…Vivian Jones. She referred to her as “Grandma Jones” or “Mrs. Jones”. They spent many hours walking, talking, and enjoying all that was around them. Virginia was preceded in death by husband, parents, brother Don, brother-in-law Fay, dear friend Vivian, and her German Sheppard Miggie.

She grew up and attended school in Sheridan through eighth grade and then moved to Ranchester, Wyoming where she attended high school and was valedictorian of her class. Virginia completed one year of college at the University of Wyoming where she was honored as the Outstanding Freshman Student. Following her one year at UW she started her professional career in Basin, Wyoming where she worked for the Farmers Home Administration.

It was in Basin that she met R. Dale Feusner and they were married September 5, 1950. They stood side by side as a team for nearly 49 years. Dale and Virginia, as a married couple, lived in Basin, Powell, Eugene, Oregon, and Gresham, Oregon before they made Lovell their home from 1956 to 1970. They moved to Powell where they spent 12 years. In 1982 they moved to Billings, Montana where they lived until the time of Dale’s death in 1999. Virginia then moved to Powell to be closer to family and in a smaller community where she lived until the time of her death.

Virginia was proud to say she worked for 41 years and 3 months before retiring. Most of those years were spent working for Cream of the Valley Dairy, Valley White Farms, and Feusner’s Deluxe Foods.

Virginia was a strong Christian woman. She loved Jesus. Each day as she aged she was challenged with the pains of arthritis, yet she never, ever complained. Her knees were shot. She was a proud woman yet never bragged about herself. She was a published poet, an author of several family books, and even placed first at the Montana Women’s Run in the 2 mile in the 60-69 age division. In our backyard kickball games she nearly always was picked last for a team, but always played anyway. (*Balls weren’t really her thing)! She was a wonderful pianist. When she was growing up she baked a cake each week to pay for her lesson.

Virginia put a positive spin to everything in her life. She loved and appreciated life. She was never negative. She was a thinker and would only react after careful thought about the different sides of each topic. Virginia always said it took too much energy and time to be negative and CHOSE to be positive! She was honest and of the highest integrity. Her daily actions showed all who she was.

Grandma Ginna or Grandma Ginger as she was affectionately known to her grandchildren was active in all their lives. She was a great listener and sounding board for each of them. They talked about life, the power of prayer, politics, the weather, the stock market, her book club books, and recipes. Grandma Ginna was known for her famous “Grandma Ginna” pancakes and homemade maple syrup. She welcomed family and their friends at her table.

At the age of 93 Virginia was still accomplishing so much each day. A list was made and away she would go, crossing off each task as it was completed. She drove, she cooked from scratch, she shopped, and she lived each day to the fullest. She appreciated her neighborhood and neighbors. It was also important to her that she support the local businesses.

Virginia was a tough, strong woman. She was an example to all of how to be a lady, yet an equal. She did not judge others, but listened intently to different people's perspectives.

Family was the most important thing in her life! Dale and Virginia Feusner were a team. They are now reunited after 21 years.

One sentence that she wanted to be remembered by was “She experienced all the seasons of life”!

We love you dearly mom, and will miss you FOREVER… until we see you again!

Funeral Service: October 23, 2020, Thompson Funeral Home, Powell Wyoming, 10:00 AM. Celebration of Mom’s life following the funeral service will be at the Common’s. The service will also be available on the Thompson Funeral Home Facebook page. Her ashes will be interned along side her husband's at Yellowstone Valley Memorial Park in Billings, Montana at a later date.

To send flowers to the family in memory of Virginia Mae Feusner, please visit our flower store.
Send a Sympathy Card