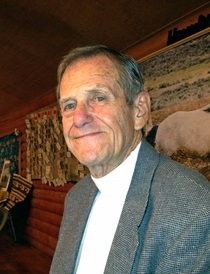 William â€œBillâ€ Herbert Baker died May 21, 2016, following a brief illness.
Bill was a remarkable man: a veterinarian, an entrepreneur, an accomplished sailor and world traveler. He was an academic ... a true renaissance man.

Bill was born Feb. 14, 1932, in Buffalo, New York. He earned his degree in veterinary medicine (DVM) from Cornell University in 1957. Following graduation he and his family moved to Virginia where he established the Warrenton Veterinary Clinic. In the early 1970s his love of sailing led him to the Outward Bound School at Hurricane Island, Maine, as a sailing instructor and course director.  In 1973, he captained a 40-foot sailboat and, along with his wife and two crew members, sailed from Norfolk, Virginia, to Cadiz, Spain, fulfilling his dream to complete a nonstop transatlantic trip. In the years following, the ships became increasingly larger as he captained small freighters around the world. He later traded his sea legs and returned to land settling in Costa Rica and Florida, as a business consultant, photographer and graphic designer.

Bill was an avid cyclist and skier who fell in love with the Rockies while cycling Wyoming with his wife. In 2002, they built a cabin in Clark as a vacation home and in 2004 established their home in Powell.

Bill was a dedicated community advocate. He was a strong supporter of Northwest College and was past president of the Rotary Club of Powell. In 2012, Bill helped form the Powell Health Care Coalition board of directors  and devoted himself to bringing affordable healthcare to the underserved in the Big Horn Basin. His inspired efforts helped to officially establish Heritage Health Center in Powell as a Federally Qualified Community Health Center in 2015.

Bill was preceded in death by his parents Dr. and Mrs. George A. Baker, his brother Dr. Karl G. Baker, and his son James (Van) Bryant.

Bill was very proud of his grandchildren: Andrew, Rachel and Emma Stack; Kyle and Garrett Whitescarver; Carlyle, Mac, and James Howard; and Kit and Van Spina.

A memorial service will be held at a later date. In lieu of flowers, the family wishes that any donation be made to an organization of your choice.

Thompson Funeral Home is assisting the family with arrangements.
To send flowers to the family in memory of William Baker, please visit our flower store.
Send a Sympathy Card