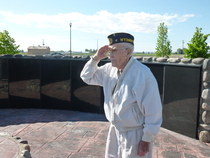 Dr. W.R. (Bob) Fordham left this earth and joined Jesus, family and friends in heaven, Sept. 18, 2016, at Powell Valley Hospital. He was surrounded by his loving family.
He was 92 years young, born at his Grandmotherâ€™s house in Hollyrood, Kansas, on May 16, 1924. His parents were Fay and Lucille Fordham.
Bobâ€™s best friend set him up on a blind date with a beautiful girl named Patricia Lindstrom â€¦ his first thoughts were, â€œI am going to marry this girl!â€
They tied the knot June 25, 1949, in Casper. They lived in Thermopolis, Laramie and then on to Powell, where he established his own optometric business and raised his family.
They had four children, Terry, Steve, Kristie and Jeff.
Bob attended school in Casper and graduated from Natrona High in 1942. He then attended the Northern Illinois College of Optometry In Chicago.
He was a lifelong Kiwanis member, an avid supporter of the Powell Community and loved to serve and sing in the choir as a member of the Presbyterian Church.
Bobâ€™s love of the outdoors has been passed on to his family through his love of fly fishing, camping, boating, golf, photography and his joy in decorating for the holidays. Yearly family summer vacations to all kinds of great places were always in the planning.
In his retirement, Pat and Bob built a cabin in the Crandall area. They worked on it together through the years and made it their special place to get away â€¦ of course where Bob was concerned the work at the cabin was never finished.
Bob was a senior in high school when World War II started. He volunteered for the draft to go into the Army. He served in France, Scotland, England, Belgium, Germany and the European Theater. On Dec. 16 1944, he lost his entire squad in a battle with Germany. Bob surrendered and was taken as a Prisoner of War. He found it hard to talk about his journey and story for many years. The things he saw and lived were beyond words. He always said he made it with bravery and endurance but knew that the grace of God and his strong faith is what carried him through. Bob was so proud of his service to his country.
Bob is preceded in death by his parents, Fay and Lucille Fordham and his grandson Collin Fordham.
He is survived by his loving wife of 67 years, Pat Fordham; his sons Jeff (Sue) Fordham, Laurel, Montana, and Steve (Taraz) Fordham, Denver; daughters, Terry (Jerry) Faxon and Kristie (Dusty) Franklin, both of Powell; grandchildren, Paul Faxon, Reanne Wolff, Gwen Fordham, Monique Ortiz, Peter Fordham, Clint Franklin, Ashley Teten, Jessica Cummings, Nathan Fordham, Lauren Fordham. Bob was blessed with many great-grandchildren also.
He was a loving husband, father, grandfather and friend.  He will be dearly missed.
We will always remember and laugh about our memories of eye exams with dad â€¦ the dreaded question â€¦ Number one or Number two?
Services will be held at the Union Presbyterian Church, 329 N. Bent in Powell on Saturday, Sept. 24, at 10 a.m. Burial will follow at Crown Hill Cemetery.
Thompson Funeral Home is in charge of arrangements.  The family asks that donations be made to the Boys and Girls Club in Powell in Bobâ€™s name.
To send flowers to the family in memory of William R Fordham, please visit our flower store.
Send a Sympathy Card